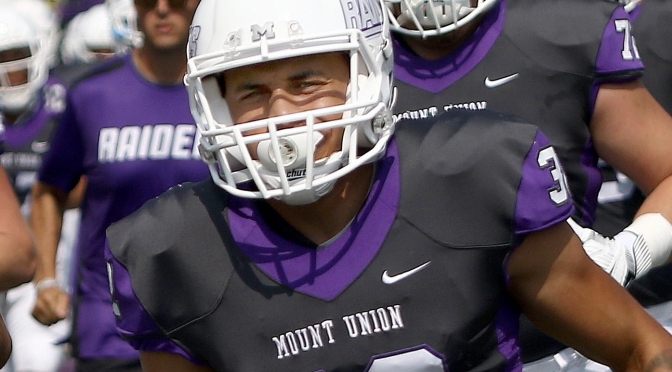 Former Massillon Tiger standout shows off versatility and tackling ability as a leader of the Purple Raiders defense.

Football is a do-your-job game.

Mount Union’s Kordell Ford does his job. Or that job. And that job, too.

No matter where he plays — and he has played several spots on the defensive side of the ball — the former Massillon standout delivers.

Is he a safety? A corner? A linebacker? A defensive end?

Mount opponents have been forced to pick their poison.

It could be as a safety, where Ford began his career and has played since he starred for the Massillon Tigers.

It could be as an outside linebacker, the positions known as the ‘spur’ or ‘Leo’ in Purple Raider jargon.

Or, it could be as an upright defensive end, despite his generous listing as being 5-foot-10, 190 pounds.

No matter how it is labeled, Ford has worn the sticker. A jack-of-all trades and a master of all.

Ford’s location on the field depends on the type of defense being used. In the traditional 4-3 alignment, which Mount had in place at the start of the season, he lined up as an upright defensive end alongside Andrew Roesch, Adam Pastor and Nate Brunson.
With the switch to the 3-4 alignment, he has moved to more of a linebacking spot, joining Mitch O’Hara, Nate Fisette and Trey Williams.

All that came after Ford — who doubled as a wide receiver and running back in addition to being a safety in high school — had spent 2018 as a safety and longed to play that spot in 2019. Things change and Ford changed with them.

“I love where I’m at right now,” said Ford, whose 15 solo tackles and eight assists leads the undefeated and nationally-ranked Raiders. “Before the season I wanted to play safety so bad. Now, I have no preference. As long as I’m on the field and contributing I am happy.”
So, too, is coach Vince Kehres.

With Ford off the line of scrimmage the Raiders are able to take advantage of his speed, football instincts and skills.

“Kordell is a good tackler,” said Kehres. “He has good football instincts of being able to anticipate what’s going to occur and being able to react quickly to what he sees. Then, he has the speed and the agility to get there, maybe right before a block is going to occur. He’ll beat the blocker to the spot and make the tackle.”

It also aids in pass coverage.

“He gives us more versatility than a normal linebacker,” Kehres said. “We can use him (in) man-to-man to cover a slot receiver or we can roll him into a deep zone. Both he and Nate (Fisette) started as safeties and both can play the deep half of the field.”

Ford, who considered attending the Naval Academy coming out of Massillon, is coming off one of his best statistical games of the season. He had four solo tackles and three assists in the 63-6 victory at Wilmington.

“At this point the coaches feel they can trust me to play anywhere, whether it be safety, in the box, as a linebacker or even at the D-line as a D-end,” he said.

Ford said his sophomore season was a learning experience.

“My strength, I’m finally starting to realize, is my tackling,” he said. “I can tackle real well and the coaches realize that, too. Last year they put me at middle linebacker and I was completely lost for weeks. Had no idea what was going on. It took me a while to pick up on it, but it’s worked out.”

He has two of the team’s eight sacks and his five tackles behind the line also are a team best.

“I am real confident with how I am playing, with how we are playing as a team right now,” he said. “The coaches have put me where they felt I’d help the most and it has been okay so far.”

Carlin Sets His Sites on Tokyo in 2020 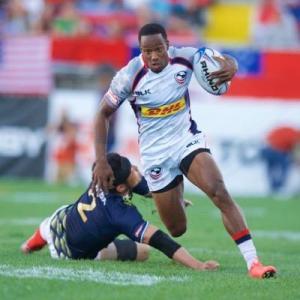 With an eye on Tokyo in 2020, former Flight Team member Carlin Isles and the fastest man in rugby, has his sites set on a goal that some might think is unachievable.

At 28-years-old, Carlin has run a personal of 10.13 seconds in the 100 meters and wants to compete in rugby sevens and on the athletics track at the 2020 Tokyo Olympic Games.

Congratulations and good luck to Carlin and the USA Sevens Rugby team and hopefully we’ll get to #CIslesRun with the USA Track and Field team as well.

Coach Jahari Murdock Rides with the Mustangs this Football Season

After 3 years at Archbishop Hoban High School in Akron Ohio and 2 years with the Golden Eagles at Glen Oak here in Stark County, Coach Jahari Murdock has joined the coaching staff at Massillon Tuslaw High School for the 2019-2020 football season.

With over 10 years of coaching experience, Jahari is currently a physical education teacher with the Plain Local School District. He is a graduate of Akron University with a Masters Degree in Exercise Science.

Massillon Jackson High School senior, Jaden Heck was one of an estimated 16,000 athletes to compete in the 2019 AAU Junior Olympic Championships held in Greensboro N.C July 24 through Aug. 3.

Jaden, who’s been training with Flight101 for 3 years, qualified in the Javelin the first year he competed in the event.  Jaden said he it was exciting having the opportunity to compete with some the best athletes in the country and that he’s looking forward to competing in the event at the next level.

After four successful seasons at Massillon Jackson High School, FlightTeam member Zack Bruni is continuing his academic and athletic career as a member of the Ashland University soccer team.

This Months Featured Product from Flight101

DO MORE – Rejuvenaid delivers an unequal plant-based powerhouse punch.  This unique blend of super-botanicals and synergistic nutrients help support the body’s natural production enabling you to power through your day.

BE MORE – Everyone can benefit from increased energy production.  Incorporate Rejuvenaid into your daily routine and have more oomph to go further!  Go for personal best! Don’t hold back!  Rejuvenaid is your key to be more.