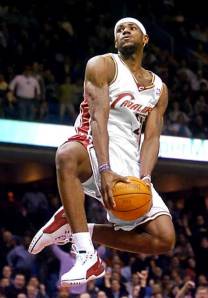 Speed and quickness are important abilities for basketball players. No matter which position you play, speed and quickness are assets, and you should do everything you can to increase them. Many players believe that speed and quickness are something you either are born with or not. And if you are not born with these abilities, there is not very much you can do to increase them. But this is not quite true. Of course natural ability does play a big role in determining how fast a basketball player can run and move. However, with consistent hard work, any player can become faster and reach the potential he or she was born with. Basketball speed is a little different from regular sprinting speed in that it involves quick starts and sudden changes in speed and direction. The most important way of training for basketball speed development is playing basketball. The only problem is that every basketball player does this in team practices and games during the basketball season. So if you want to close the gap between yourself and the fastest players, you need to supplement your on-court running with speed-boosting conditioning drills during the off-season. In particular, you should perform running sprints and special power drills called plyometrics. But what even fewer players recognize is that sports nutrition can also affect speed on the basketball court, so after I say a few words about conditioning I would like to show you how you can use nutrition to gain a speed advantage over other players.   For more read….

In the spotlight: Matthew Pressley

Seen here completing a single leg/balance squat on the TRX, Matthew Pressley is a 2009 graduate of  Canton McKinley who is working hard to get back in the race.  Matt’s goal is to compete this season in track and field in the Open Division in the sprinting events.  After not training since high school, Matt has put in the work and managed to improved his 40-yard time by 0.57 of a second  – averaging 4.67.

Hoban Defeats the Massillon Tigers for The DII State Title

The Knights got out to a 14-0 first quarter lead and never looked back.

Congratulations to the Coach Tim Tyrrell, his staff and the Hoban family on another outstanding championship season.

FlightTeam member and junior running back Brenden Craig ran for a school-record 356 yards and four touchdowns to lead Jackson to a victory at home to close out the 2020 football  season breaking the previous record of 331 set by Kyle Calvert against Boardman in 2002.

Giving props to his offensive line, Craig said “It’s our last game. It’s something I wanted do.  Our offensive line did a great job. They were moving forward all night. I like being able to make those guys happy.”

That monster effort gave Craig 1,421 yards rushing and 15 touchdowns on the year.

The performance also ranks No. 2 all-time in Stark County history, according to Canton Repository records. Duce Johnson of Alliance set the record at 462 in 2017 in a game against Salem.

Now in his 18th year of coaching, former Major League pitcher Shawn Nottingham has teamed with the SportsDome to provide professional Baseball instruction to area ball players.  After 3 years each as a pitcher with the Seattle Mariners and Cleveland Indians and 1 year with the Pittsburgh Pirates respectively, Shawn now offers his considerable major league experience to local baseball players looking to improve their pitching, hitting and fielding skills.  For information on individual or group sessions Coach Nottingham can be reached at (330) 933-6874 or at the SportsDome at (330) 494-3733.

This Months Featured Product from Flight101

Our Green Eagle Cream has just the right combination of hemp-derived cannabinoids, arnica, camphor & menthol to give your body the relief it deserves.

Building Champions for Over 30 Years